A Family Holiday to Malaga, Spain ǀ with Clickstay {Part One}

Back in June I decided to write a blog post and enter a competition which Clickstay were running and I can only tell you my overwhelming surprise when I went and won!  After much thought we decided to go away for 10 days around the time of October half term.  As we had chosen the south of Spain for our destination, we figured the weather would still be pretty decent and so we’d still be able to make the most out of our time together. 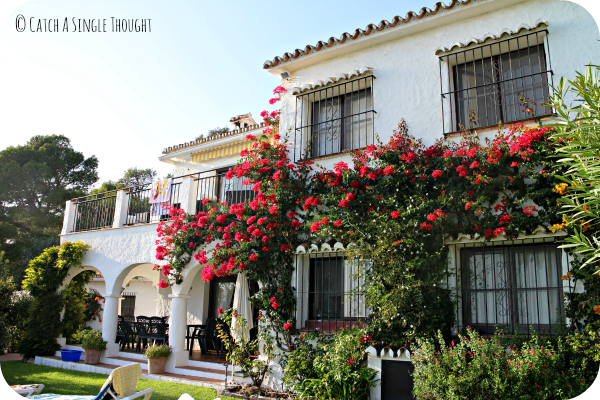 Choosing a villa proved to be the most difficult part of the prize; there were just so many different ones to look at but once we had decided on the south of Spain the pieces gradually began to fall into place.

I cannot even begin to tell you what an amazing time we had.  Spending 10 days together as a family, with James around and not at work and the kids not at school, is always a winner but being able to go somewhere which ended up being lovely and warm, with hours to dedicate to being in the pool and enjoying the villa…it was just a really, really special time. 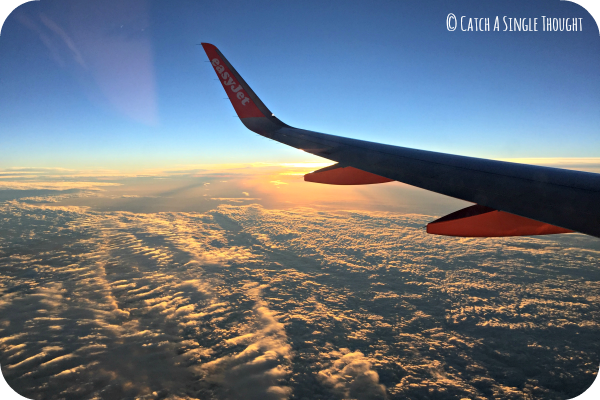 We flew from Manchester on a ridiculously early flight; I think we were up and out of the house by 3am and we’d put the kids to bed in their onesies figuring that they could then just be taken from their beds into the car and stay asleep.  We should probably have realised there was very little chance of that happening!  Both kids were wide awake and practically bouncing around the car with excitement.

The flight was straightforward and although we had some trouble finding our hire car, it pretty much went as smoothly as we might have hoped.  The more we fly with the kids the more we are learning what works and what doesn’t, and I think we managed fairly well this time around.

We then had fun in our hire car, winding our way up through the hills from Malaga airport to Mijas.  I will say that have a car with a 1.0 litre engine, four people and three 20kg cases, trying to make it up some incredibly steep hills…well, I was just really relieved when we finally pulled up outside our home for the next 10 days. 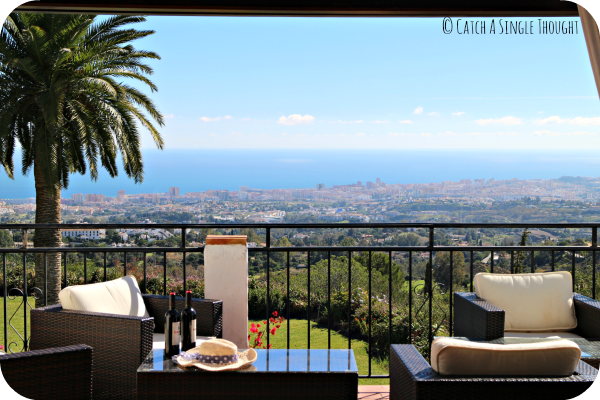 Without a doubt, the first thing that hit us was the view.  It was an absolutely stunning view, right across the local area to the sea, well worth the white-knuckle drive in the car to get there. 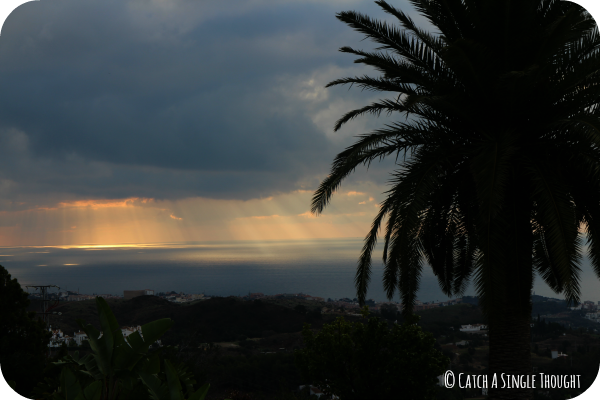 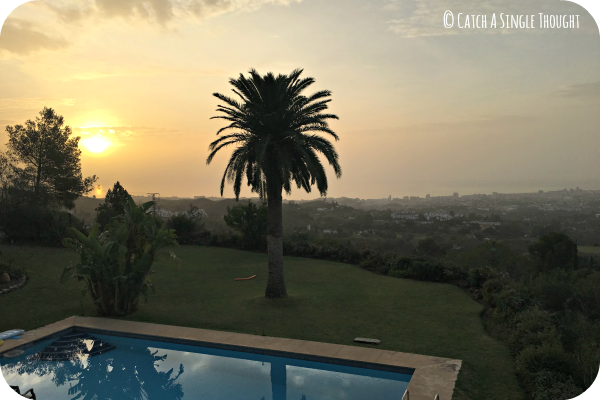 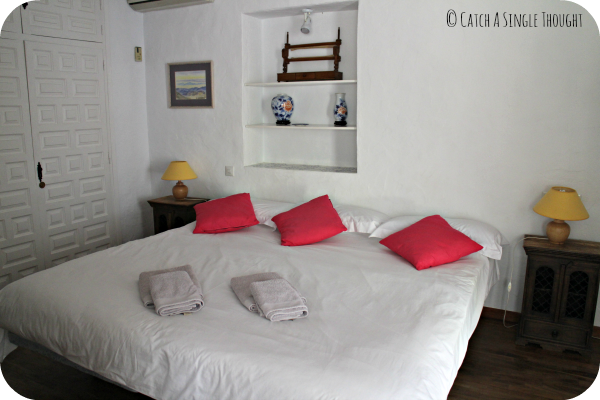 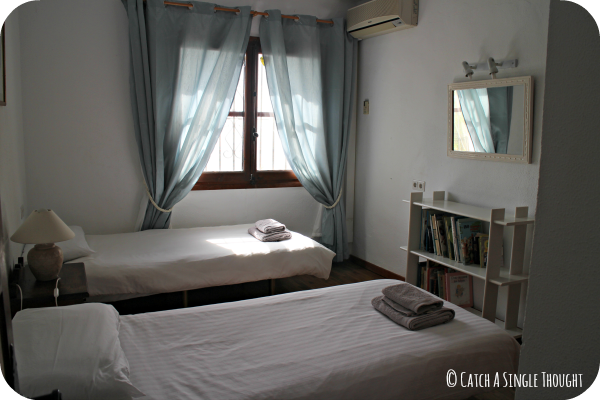 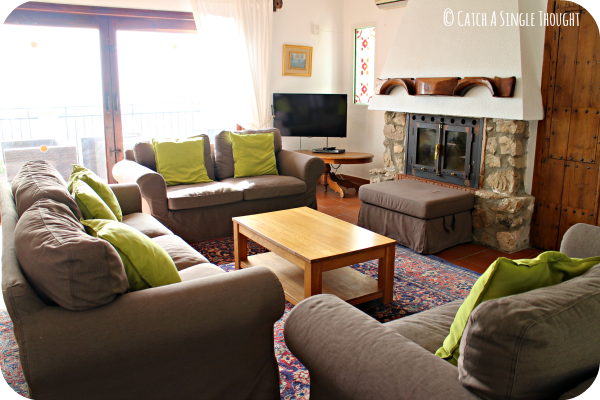 The next thing we discovered was that the villa was huge.  We had various configurations of family members coming out to stay with us for the days we were there and the villa we chose had 5 bedrooms, three bathrooms and a separate toilet downstairs.  We had more than enough space for all of us, even when there were 9 of us in the villa and I particularly loved all the quaint, authentic touches which had been kept.

The villa had originally been a farmhouse and had been extended but a lot of the doors and fixings were the originals and they were gorgeous.  Have a look at my video below for more clips on what the villa looked like inside.  It’s worth it! 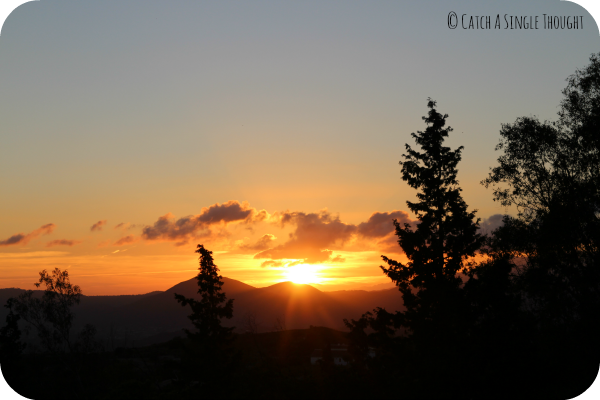 You would definitely need a car if you were staying in Mijas, the hills are incredibly steep and you aren’t near to any shops so buying food or eating out is practically impossible without some form of transport.  We tried to order Chinese on our last evening and the delivery guy got lost, which probably gives you some idea of how secluded you are! 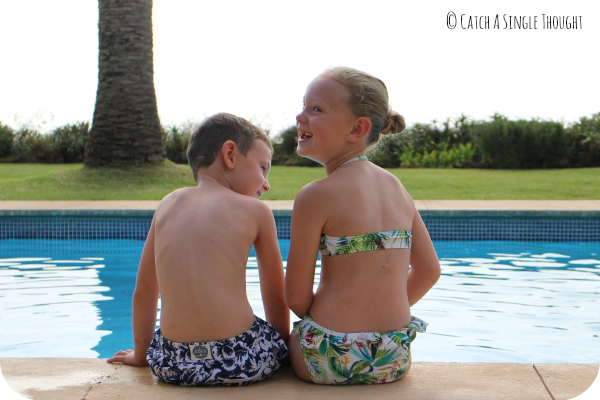 The whole purpose of this holiday was to spend some time chilling out and relaxing as a family.  We had done our ‘active’ family holiday over the summer and we wanted to be able to head somewhere warm and unwind.  This holiday absolutely fulfilled that brief. 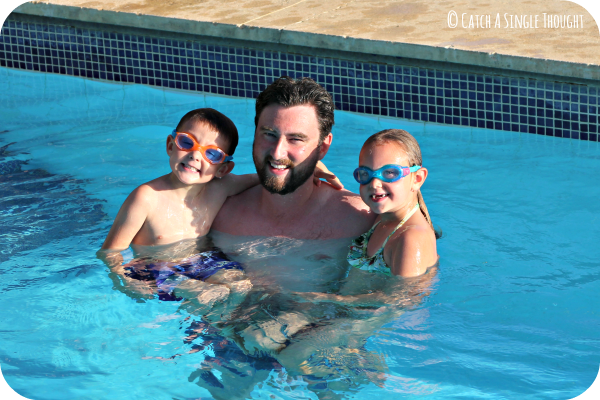 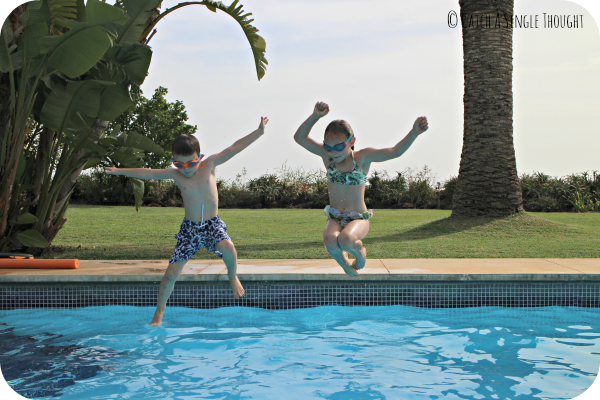 We soon fell into a routine of mornings spent lazing around the villa as we waited for the clouds to clear, lunch out on the patio and then hours and hours in the pool for the kids whilst we soaked up the sun, read our books and enjoyed a glass or two of sparkling wine. The terrace quickly became one of my favourite places to hide away.  On the first floor, it looked out over the pool and the garden so I didn’t feel too disconnected from everyone but still offered a peaceful retreat.  And of course the views to boot.

We did venture out of the villa on a couple of days, apart from to just pick up food supplies from the supermarket.  Our first day trip was to Mijas Pueblo, which was further up into the hills much to my surprise. 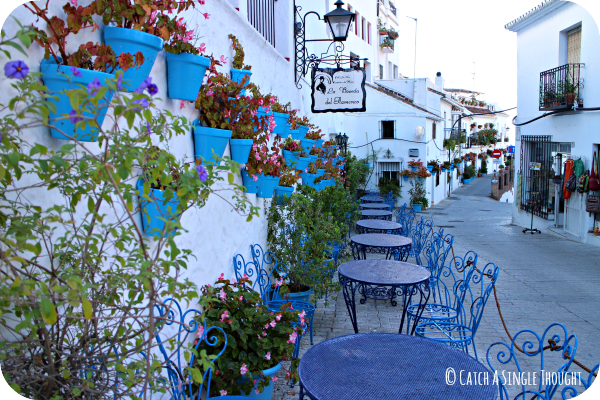 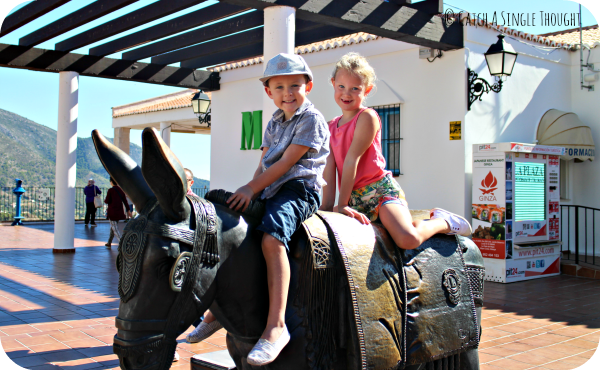 This was a beautiful Spanish village with whitewashed walls, quaint cafes, a lovely town square and even donkey rides. 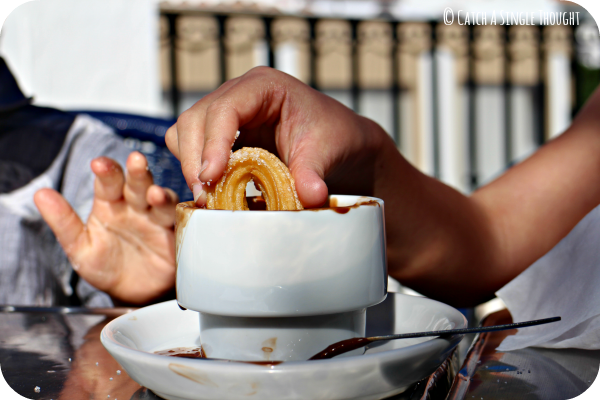 We introduced the kids to real Spanish churros and took a ride around the village on a donkey cart which proved to be quite wise as there were lots of windy little streets we would have completely missed out otherwise. 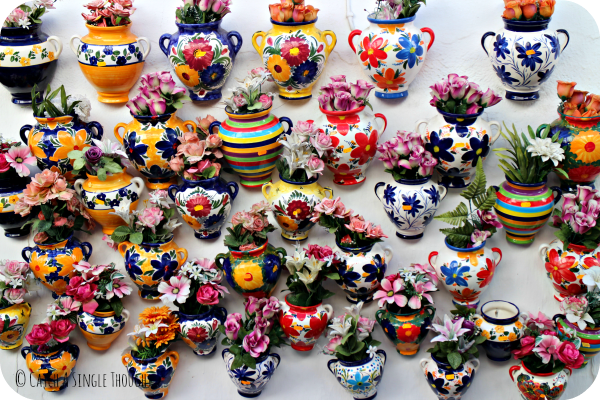 Although the walls of the buildings were all white, the village was surprisingly colourful, with the trend seeming to be for these wall mounted flower pots.  They were on almost every wall we saw and being sold in all of the stores we visited as well.  I’d have quite liked to bring one home but didn’t trust it to arrive in one piece. 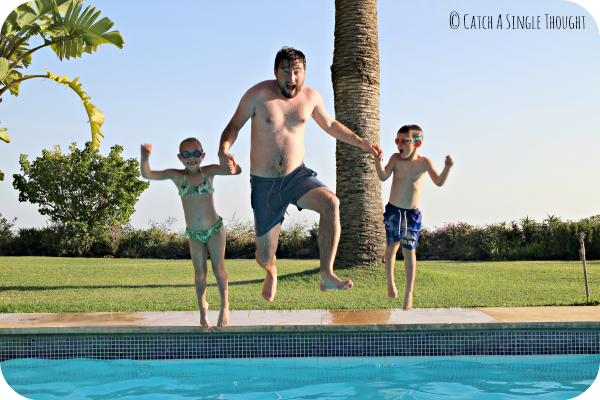 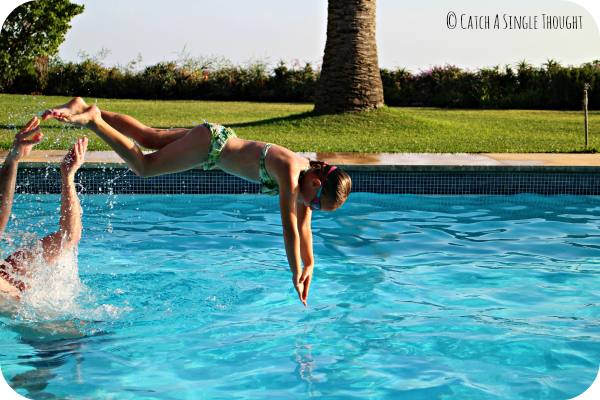 After a few hours wandering it was time to head back to the villa as Meg and Eli were itching to get back into the water again.  One thing which really became clear whilst we were away is how confident they both are in the water now and I loved watching that confidence grow and develop even further during the holiday.