Jess McGlynnFebruary 22, 2017
Welcome to my post for the blog tour of Anna Franklin Osborne’s ‘Walking Wounded’.  I was kindly sent a copy of the book in order to write the following review…
Anyone who has been here before will know that I have a real love of stories set during the First and Second World Wars so when I heard about ‘Walking Wounded’ I was immediately intrigued.  This is a book which shines the spotlight on those who were left behind whilst the men went off to war as well as touching a little bit on the soldiers as well. 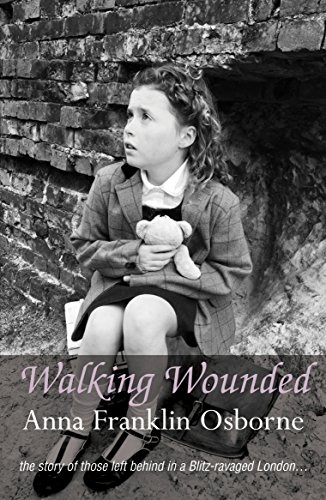 It is a family saga which predominantly follows the story of one young woman, born at the end of the First World War into a big family, trying to find her place, surviving through the Second World War and ending with emigration to Australia as part of the ‘Ten Pound Poms’ exodus which took place during the 1950s.
I believe that the story is based, in part, upon the experiences of the author’s own family and there are certainly plenty of interesting facts to keep you turning the pages.
The book is incredibly short at just 156 pages and for me, I would say that it reads more like a collection of polaroid moments rather than a novel.  The paragraphs are short and snappy and jump through the various time periods fairly rapidly which gives it that ‘snapshot’ feel.  Additionally, you don’t just follow the main character, May, but other members of the family including May’s older sister Lydia who has her own battles to face, Lydia’s husband who is left behind when the men go off to war, several of May and Lydia’s brothers who go to fight overseas and May’s husband, Jimmy as well.
Due to the fact that you are following the story of many different characters, it could be so easy to get lost in who is who and what is happening but the author manages to give each one an individual voice, and although they are all experiencing the same awful situations, their reactions and their ways of coping and keeping on are all incredibly different.
This is a moving story about how people’s lives were impacted by the eruption of the First and Second World Wars and how the decisions that were made in such trying circumstances had far-reaching and long-lasting consequences.  It wasn’t just the men who suffered but also the women who were left behind to keep on going, and to pick up the pieces when the soldiers returned.
Overall I found the story to be an incredibly fast read and an enjoyable one, however one thing I do wish is that the book had been longer!  I think Anna Franklin Osborne has such a readable and relatable writing style and I could easily have got swept up in the story.  I would have loved even more detail about the characters and how their lives were during this time in history, and some more depth on some of the harder topics she touched on.  I certainly hope she continues writing so I can keep an eye out for future work!
Now some exciting news, you can win one of two signed copies of ‘Walking Wounded’, just use the rafflecopter below to enter.  And make sure you hop over to some of the other blogs also taking part in the tour.  Information on this is also below. 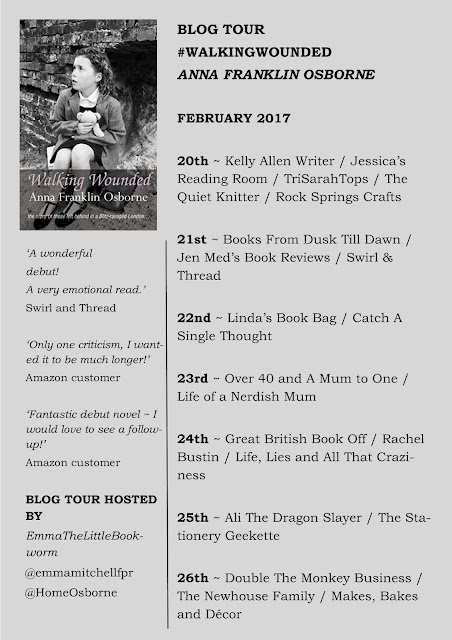 I was provided with a free e-book version of Walking Wounded for the purpose of this review.