I’m a little late in sharing the books I read in the month of February which I am putting down to the craziness of the last week or two.  I seem to have fallen behind in everything but when it comes to reading and the TBR I set for myself at the start of the month, I don’t think I have done too badly.

The Goldfinch – Donna Tartt
At 864 pages I should probably have only chosen this book to read in the month of February, especially as it has long been my book nemesis!  I joined an online book club called MotherBookers and this was their first book pick so I decided to just get on and give it a go.  It took me an absolute age to get through and I can’t say that I enjoyed it very much.  It’s about a young boy called Theo Decker who loses his mother in a terrorist attack at the start of the book (so not a spoiler don’t worry!), Theo’s dad is an alcoholic and he doesn’t have any contact with him so he is taken in by the wealthy family of a school friend.  We then follow Theo’s life as he tries to make sense of his grief, becomes a teenager, makes some pretty poor decisions before we leave him when he is in his mid-twenties.  Threaded through this narrative is a connection to a famous painting called The Goldfinch which was/is important to Theo and his mother.

I have heard so many people wax lyrical about this book and I can certainly say that Donna Tartt has a beautiful way with words but I thought the book was far too long, I couldn’t connect with Theo as a character AT ALL and I felt as though I dragged myself through the 800 pages.  But I’ve read it now and can finally tick it off the list!

Walking Wounded – Anna Franklin Osborn
I then read an e-book which I had been sent and which I reviewed in full in a separate post.  You can read that here.  This is a family saga which covers a vast period of time from the end of the First World War through to the 1950s and the Ten Pound Poms.  It was an incredibly short read and I did quite enjoy it. 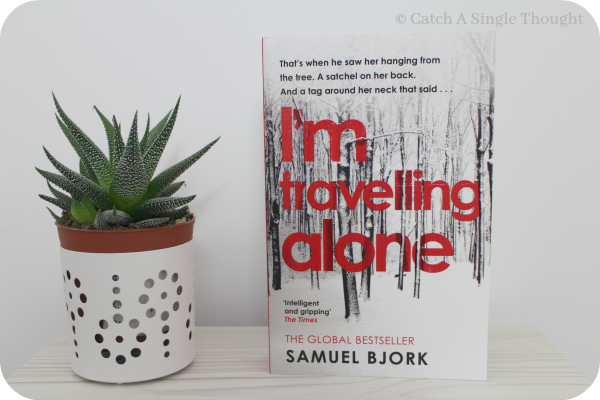 I’m Travelling Alone – Samuel Bjork
I needed a book to redeem my reading experience and this book was just that.  A debut novel this is the first in a series about detectives Holger and Munch.  It is classed as Nordic Noir and is a psychological thriller set in Norway which sees Munch’s team of detectives trying to catch a serial killer who is abducting and murdering young girls.  It was twisty and spine-tingly and I loved it.

A Long Way Gone – Ishmael Beah
This is a memoir of Ishmael Beah’s time as a boy soldier in Sierra Leone in the 1990s.  It was moving and insightful and I was horrified by some of the information he puts across.  I had expected it to cover more of the experiences Ishmael Beah had whilst he was a boy soldier but this was more about his personal journey to redemption and self-forgiveness which I completely understand as I can’t even begin to imagine how it must have been to be 13 years old and conscripted into the government army after being displaced from your family and village.  It was incredibly short and I’m so glad I read it.

Do let me know what books you have been reading this month or whether you have read any of these.

The Museum of Liverpool ǀ Day Out