Sitting down and looking at all the upcoming releases for the rest of 2017 makes me hyper aware that there are so many books I want to read before the end of the year and that’s before I even contemplate the 80+ books already lounging, unread and untouched on my bookshelves.

I’ve made good headway this year with my TBR pile and have tried really hard not to start any new series I can’t finish (i.e. they haven’t finished being written yet) or buy books unnecessarily (you can see how well that is going here…) but there are always going to be books which I am particularly excited about getting my hands on throughout the year and so I thought that today I would share some of those with you.

For total transparency, the links here are affiliate.  Using them means I (at no cost to you) get a small commission which keeps me in my book buying habit is always gratefully received. 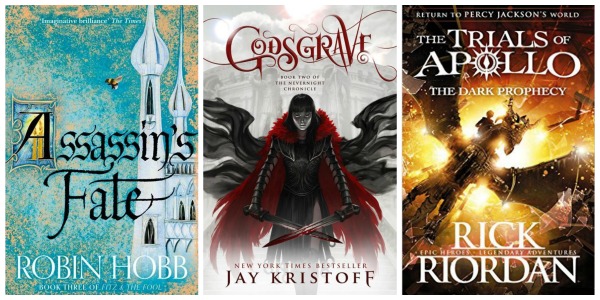 Godsgrave (Nevernight #2) – Jay Kristoff
This is one of the twistiest (yes, it’s a word) books I read in 2016 and I am so excited about the sequel!  It’s hard to go into too much detail without spoiling anything but it bascially picks up the story of our protagonist Mia Corvere who is at the Red Church, a school of assassins.  It is vicious and graphic and diverse and utterly fascinating.  I did a full non-spoiler review of the first book which I have shared below, if you are interested:-

Origin (Robert Langdon #5) – Dan Brown
Dan Brown is like wine for me.  I know I shouldn’t keep having another glass and yet sometimes I just can’t help it.  Don’t get me wrong; I loved Angels and Demons and even the Da Vinci Code ticked the boxes for me but since then his books have wandered a little too closely to the predicatable and formualic side of the tracks.  Yet there is something which keeps me reaching for the next one when it comes out nevertheless.  They aren’t difficult to read and I appreciate the attempts he makes to twist storylines and imbue them with a hint of mystery.  Although allowing Tom Hanks to be cast as Robert Langdon is something I don’t think I’ll ever get over…

And now two books which have technically already been released but which we are excited to get nonetheless:-

Assassin’s Fate (The Fitz & The Fool #3) – Robin Hobb
This has been released in the most beautiful hardback cover but as I already have the first two in paperback I am patiently waiting until March next year when it will be released *sob*.  Robin Hobb is one of my all-time favourite fantasy writers and this series is just as good as her others.  She has two other trilogies which feature Fitz and The Fool and are well worth reading before you begin this trilogy as we pick up where there stories left off.  And I honestly can’t go into much more detail than that except to say that if you like strong character-led, adult fantasy books which rich description and the ability to get lost in another world…then Robin Hobb is an author you need to try.

The Dark Prophecy (Trials of Apollo #2) – Rick Riordan
Okay so technically I’m putting this is for James rather than for me as I’m still gradually making my way through Riordan’s Heroes of Olympus series but I know that we will be purchasing it pretty soon after the release date as Rick Riordan is undoutebdly one of our favourite authors.  His books are middle-grade (age 8+) but they are absolutely hilarious and so well written that you really don’t notice they are actually books for children.  Honestly.

This current series is about the god Apollo who has been cast back down to earth after upsetting his father, Zeus and trapped in the body of a teenage boy.  Of course, he still thinks of himself as a god and not as an awkward teenager so the calamity, and hilarity, that ensures after that is pretty much guaranteed.

The Importance of the Small Things ǀ Little Loves