May is typically our busiest time of the year so I was surprised to find that I had managed to read so much this month.  I had obviously needed to escape a little more than unusual from the every day stuff! 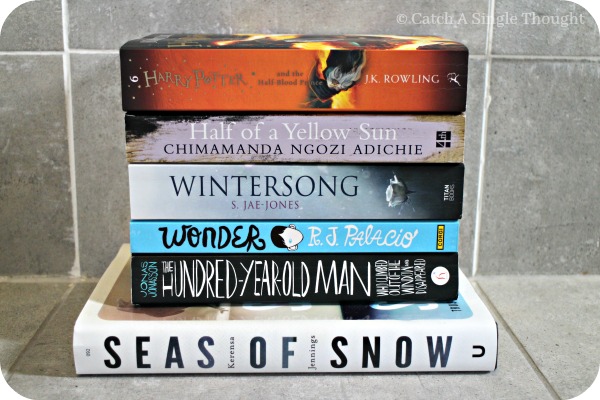 I actually had a pretty good reading month too, enjoying most of what I picked up:-
Harry Potter and the Half-Blood Prince – J.K.Rowling
I’ve mentioned a few times now about my re-read of the Harry Potter books and this is just a continuation of that.  I just have the final book to go now and I am really enjoying the re-read so far.  There are so many details which just can’t be included in the films which I had forgotten all about and it’s almost like reading them for the first time in many ways.
Half of a Yellow Sun – Chimamanda Ngozi Adichie
This was my second Adichie book and I really enjoyed it, if enjoyed can be the right word.  It is about the war in Uganda in the late 60’s when Biafra was struggling for independence.  We follow five different characters in various stations of life and how they were affected both in the run up to the war and during the war.  There were parts of this story which were a little over dramatic and soap-opera like for me but it’s a period in history that I knew next to nothing about before picking up the book and for that reason alone, I think it was a very important read and one I’m glad I picked up.
Wintersong – S. Jae-Jones
This is a YA fantasy book which I picked up believing it was a re-telling of the much loved Labyrinth story.  I actually discovered after picking it up, that it was originally written as an adult fantasy but was changed and a lot of the more graphic content was cut out which was certainly interesting to know.  This is a very, very loose Labyrinth re-telling and I would say that if you are a big Labyrinth fan that you might want to go in knowing that it only takes its inspiration from the film in the vaguest sense.
This was probably my least favourite read of the month; it was a little stilted and some of the interactions were very odd, particularly between the Goblin King and our protagonist Liesl which I think stems from the adjustments made to the book as above.  I also thought that the Goblin King was a little bit of a let-down.  I had imagined him as a much darker and mysterious character and he fell flat for me.  Don’t get me wrong, I will be picking up the second instalment as I am intrigued enough to see where the story goes and I am hoping the writing will develop into something a little more as the story continues.
Wonder – R.J. Palacio
Then onto what was probably my absolute favourite read of the month: Wonder.  This is a middle-grade story about a young boy called August, who has a severe facial disfigurement.  This facial disfigurement has meant August has been home-schooled up until the book begins when he is about to join a mainstream school.  We read from many different perspectives in the book which I adored and I fell into this book so hard I read it in one sitting.  This is a story about friendship, acceptance, family, forgiveness and ultimately kindness.  I would highly, highly recommend it.
The Hundred-Year-Old Man Who Climbed Out of the Window and Disappeared – Jonas Jonasson
I read quite a few heavy books this month so The Hundred-Year-Old Man made a welcome change.  It was an amusing and enjoyable read literally about a Hundred-Year-Old man who climbs out of the window of the old people’s home on his 100th birthday and subsequently gets up to all kinds of high jinks.  We follow the present time and then the man’s past where he was supposedly involved in some of the world’s biggest political events.  There are some laugh out loud moments, some interesting political observations and although I feel it could have been shorter and was a little long-winded in places, this was very much a ‘does what it says on the tin’ type of book for me.
Seas of Snow – Kerensa Jennings
I was sent a copy of this book for review
This is a psychological-drama about a young girl called Gracie, who lives in the North East of England with her Mam.  Gracie’s life is thrown off course by the arrival of her mum’s brother, Joe.  Joe is a psychopath who begins a long torment of Gracie and her mother for many years.  Gracie finds relief through the discovery of poetry and her friendship with their neighbour, Billy.  There are definite trigger warnings in this book for domestic abuse, sexual abuse and child abuse and this is a very dark story.  However, the writing is also incredibly uplifting in places and Gracie’s friendship with Billy is very charming.
Pacing was something of an issue for me, as you flick between past and present and read from a number of different points-of-view.  I also wasn’t a huge fan of the ending and I guessed the big ‘twist’ way before it was revealed but there was definitely something about the book which drew me in and kept me returning again and again.
Don’t forget you can purchase any of the books mentioned here using my affiliate links (it won’t cost you anything extra and it helps support my book buying habits!!):-
Book DepositoryAmazon
Happy Reading!

Why You Should Learn the Local Lingo When Travelling