I was asked a number of times over on my 1K Q&A video to recommend my all-time favourite reads and although it seemed like a slight cop-out, I said that it was too tricky to simply pin down one or two books which were my ultimate favourites.

This is mostly because I read so widely and I have books I adore in each different genre which I would want to recommend.  It was for this reason that I was inspired to create a series of posts in which I talk about my favourite books and this week I am starting with one of my go-to genres: historical fiction.

Hopefully some of these books you won’t have come across before, although I know I have mentioned a couple here previously.  But I have tried to choose from a variety of time periods and each one holds something special which has made it stand out to me:- 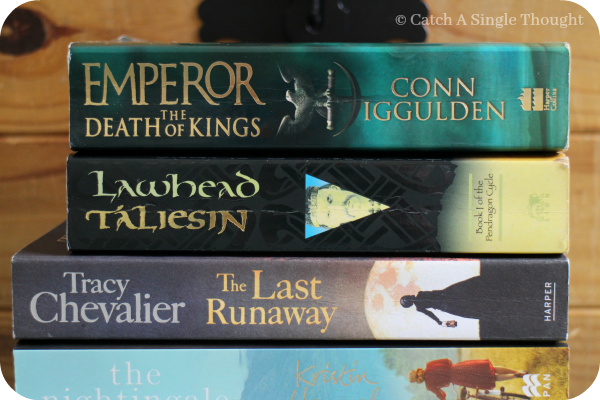 Emperor Series – Conn Iggulden
The first book you see here, The Death of Kings is actually not the first book in Conn Iggulden’s ‘Emperor’ series but I appear to have mislaid the first book and I didn’t want to not include it as I think that Iggulden is a real master of historical fiction.  I have read two of his series now, this one which is about Julius Caesar and one about Genghis Khan and both times I have been utterly blown away but the depth of his research, the scope of his story-telling and the way he makes me feel about infamous figures from history.  I would highly recommend reading any of Conn Iggulden’s books and I’m excited to read his next series which is focused around the War of the Roses.
Taliesin – Stephen Lawhead
This is the first book in a series which is part fantasy and part historical fiction and, again, Stephen Lawhead is an author I consider to be a total master with words.  His books tend to be very character driven with lots of Gaelic and Celtic influences throughout and his Pendragon cycle is based on the myth of King Arthur and his Knights of the Round Table with a dash of magic thrown in for good measure.  Each book follows the story from a slightly different perspective with one character at the centre and I just adore them.  I have to add that I think the new covers are stunning and I will be replacing my copies at my earliest opportunity!
The Last Runaway – Tracy Chevalier
Jumping hugely forward in time now to The Last Runaway which is set during the 1850s.  This tells the story of a young girl called Honor Bright who moves from Dorset in England to Ohio in America.  Honor comes from a Quaker family and she moves with her sister when she decides to get married.  The story focuses around Honor coming of age but is set against a backdrop of slavery in America and how Honor becomes caught up with the Underground Railroad.  As a Quaker she is naturally against slavery and becomes entangled when a runaway slave turns up at the farm of her new family.  This was a period in time I hadn’t really come across before in terms of fiction and I thought it was really well written and a very moving story. 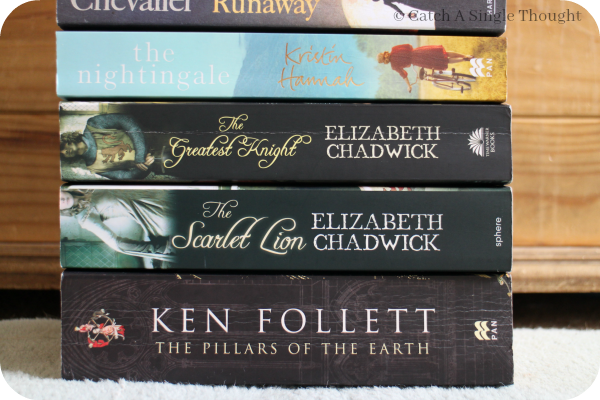 The Nightingale – Kristin Hannah
Now on to a book which I know I have waxed lyrical about before as it was one of my favourite reads of 2016; The Nightingale.  This is a book set in the Second World War and we predominantly follow two sisters who live in Occupied France.  The two sisters are very different in personality but both choose to resist the occupation in very different ways.  This book was so moving and so beautifully written.  It’s high up there as one of my all-time best books.
The Greatest Knight & The Scarlet Lion – Elizabeth Chadwick
This duology was the first Elizabeth Chadwick I ever read and I suppose for that reason it holds a nostalgic place in my heart because I’ve actually enjoyed every Chadwick book I’ve picked up.  It begins in the 1160s and follows the story of William Marshal, a young knight who is plucked from obscurity when he saves the life of Eleanor of Aquitaine.  He goes on to become the Earl of Pembroke and eventually the Regent of England and these two books follow his life story; largely based on real events and history.  I thought it was fantastically done and these are often the first books I recommend if asked for historical fiction set during this time period.
Pillars of the Earth – Ken Follett
At first glance the sheer size of this book would put many people off, especially when you learn that there are actually two books in the series but oh my it is worth the effort and honestly, it reads so, so, so quickly.  It is a story set in 12th century England and focuses around the construction of a cathedral.  It sounds quite uninteresting when you read the blurb but if you like strong character development in your books then you will fall head over heels for this story.  There is love, conflict, family drama, ambition and a whole host of characters.  There’s a reason this book is considered a masterpiece and I would say if you’ve ever thought about reading it, then I would highly recommend just jumping straight in.
Do you have any favourite historical fiction books?  I’d love to know!

Don’t forget you can purchase any of the books mentioned here using my affiliate links (it won’t cost you anything extra and it helps support my book buying habits!!):-