In November last year I featured a review for a brand new television show on CBeebies called Kazoops.  The show features a young boy called Monty who, along with his pet pig, must solve various problems faced in every day life.  This week CBeebies have aired some brand new episodes and we were excited to see what new challenges Monty would face and overcome.

Monty has a big imagination and this comes through in the way he views the world and deals with the issues he faces.  The show is aimed at both boys and girl aged between 4-9 years and covers a number of different topics which children may be curious about.

For example, in Friday’s episode (which is currently available on BBC iPlayer),  Monty is faced with a dilemma when playing with his cousin Flora.  Flora is a quiet child and doesn’t play in the same way as Monty; something which initially puzzles him. 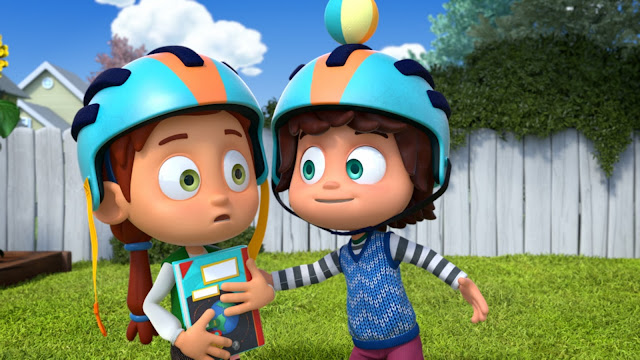 After an adventure under the sea, Monty realises that it takes all kinds of different people to make the world the wonderful place it is. What makes the world such a great place is that we are all different; variety truly is the spice of life!

I love the way the messages are put across in Kazoops along with some catchy musical pieces at the same time.  The characters are bright and friendly and the animation really draws the eye.

I can also appreciate as a parent, that the themes featured in the show open up an opportunity to talk with your children about various topics.  The show is a bite-sized way to introduce these topics to kids and we enjoyed chatting with Meg and Eli afterwards about the ways in which are different from our friends, but how that it such a good and exciting thing.

Just because someone doesn’t see things the same way as you do, doesn’t mean that you can’t get along!

Well done to Kazoops for another informative and fun episode.  If you haven’t come across Kazoops before then you can see the new episodes which were aired this week on BBC iPlayer.